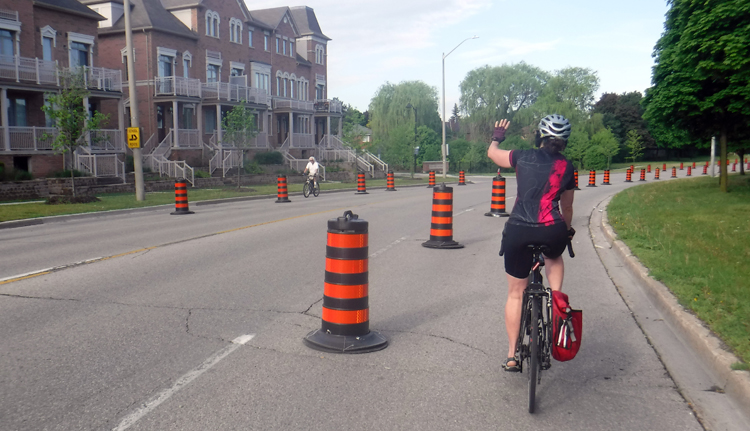 Bike Lane vs Urban Shoulder shown in Videos Cycling infrastructure using urban shoulders to provide “safe” area for cycling, car parking and traffic calming is a compromise solution. Lisa Stokes, a BikeBrampton member shot these videos (5 minutes total), to demonstrate how it feels to cycle in a bike lane versus an urban shoulder. Cycling […]

Lisa Stokes, a BikeBrampton member shot these videos (5 minutes total), to demonstrate how it feels to cycle in a bike lane versus an urban shoulder.

Lisa virtually delegated on behalf of BikeBrampton, using three short videos. Her introductory video (below) outlined the key points that BikeBrampton made about the 2020 resurfacing report in item 10.3.6, followed by an invitation to Council to accompany her on a ride of a buffered bike lane and urban shoulder. She created videos to demonstrate her points.

The road noise in the video makes it difficult to hear for some video viewers. Lisa has provided her written video commentary:

I’m now at Bramalea and Central Park. This is a great facility.

One improvement I’d like to see is that the bike lane goes to Bramalea so there’s no conflict zone between bikes and cars at the intersection. I’d also like to see no dashed lines so the cars are not allowed to merge into the bike lane when turning right.

I love this facility because the buffer is so wide that it keeps the cars a long way from the cyclists. The bike lane is actually wide enough for cyclists to ride side-by-side.

If I was riding with my child here I would be riding over here next to the buffer and I would have my child on my inside between me and the curb, which would make them feel very protected, not only that they were far away from cars, but also that I would be able to ride beside them and guide them and chat with them, and provide an extra buffer between them and passing cars.

Now the facility turns into an urban shoulder and cars are regularly parked on the urban shoulder. So in order to pass this car here, I have to do a shoulder check, signal, another shoulder check, manoeuvre out and take the lane. And in a situation like this where cars are parked several car lengths apart, I have to continue to control the lane because it’s not safe or predictable for me to weave in and out, but a lot of inexperienced cyclists don’t realize this and get into continual conflict with motor vehicles in a situation like this. And here we come up to another car. In this case we pulled in, because there were more than about 10 car lengths between the parked cars, and to allow a car to pass us. These are manoeuvres that take a great deal of confidence and experience, and the 60% of cyclists that are interested, but concerned, would not be convinced that this type of cycling facility would keep them safe enough to get them off the sidewalk.