Montreal, Canada hosted the annual Winter Cycling Congress for 2017. #WCC17 was full of insights to encourage winter cycling this year. These are our top 5.

Montreal, Canada had the honour of hosting the annual Winter Cycling Congress for 2017. The event was live-tweeted using the Twitter hashtag #wcc17, some of which we “re-tweeted” on our own Twitter account. The WCC was full of wonderful insights to encourage winter cycling this year. These are our top 5.

Making a city safe and enjoyable for winter cycling requires a little more than good will and wishful thinking. It requires planning, engineering, maintenance, and promotion. There were 2 cities mentioned that stood out as setting the standard in this regard.

Oulo, Finland is the winter bike capital of the world. 200K residents 150 kms below arctic circle. 77% of the population of Oulu use bicycles, and 42% use them in the winter. In Oulu, they don’t use salt on cycling routes. Instead, Oulu keeps their paths hard packed for traction and accessibility. Priority routes in Oulu are plowed and cleared by 7am. They are ready to use for the morning commute, and networks can be relied on. 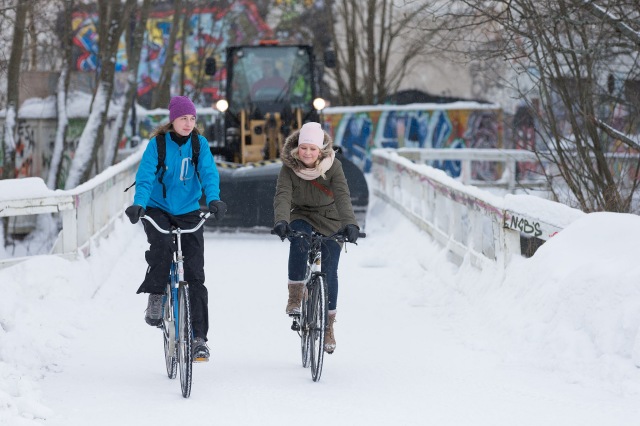 Copenhagen recognizes that bicycle infrastructure provides the best return on investment of any infra investment when you factor in health, jobs, time saved etc.

Emphasis is placed on the ease, pleasure and community benefits of cycling in successful winter cycling cities. Cycling in winter should be fast, easy, and comfortable. The primary reason that will stop residents from riding in winter is ice and snow not being cleared. In car-oriented suburbs like Brampton, councillors represent their constituents desires. Therefore, Active Transportation must be made appealing. The right choice must be the easiest choice. In Copenhagen, people don’t ride their bicycle because it is greener; they do it because it’s the fastest and easiest way to travel.

In both Copenhagen and Oulu, they recognize that you can’t only have success using “carrots”. Sometimes “sticks” are needed. For example: In Oulu, most residential streets are dead-ends. This cuts down on through traffic & improves conditions for cyclists & pedestrians. Cars can drive in snow and ice, and they’ll make it. Bike riders generally won’t attempt to ride if their route isn’t clear.

The engineering profession still focuses primarily on automobile throughput. Trying to dismantle this is an uphill battle and results in asking the wrong questions. We should be asking how to build the kind of city we want: What kind of economy? People driving to shop centrally (in malls), or people cycling to shop (locally)? Also important: The narrative about cycling must change. It needs to move away from a summer recreation activity to a year-round transport choice.

…Instead of putting the onus on cyclists.

It’s important to remember that as recently as 1978 Copenhagen was still a car-centric city. It was the residents that demanded change. They wanted public space instead parking lots. Gathering spaces instead of highways. And bike trails instead of free, abundant parking. There is safety in numbers. As the number of cyclists increased, the number of serious collisions declined.

We should not demand that cyclists protect themselves. Instead, we should demand that the city protects cyclists, and make cycling safe.

“If it’s not safe for kids, then who is is safe for?” – Ty of @elgruponorte on the need for advocating for better infrastructure

Temperature is not a significant deterrent to winter cycling. Poor maintenance is. Until -25C, temperature doesn’t discourage cycling in Oulu. Before then, there is no “bad weather”, cycle track maintenance is key. Sweepers and brine work better than plows and salt for bike lanes. Copenhagen, like many Ontario communities, gets sleet, freezing rain, snow, etc. Their bike lanes are cleared first and have been for the past 10-11 years. It is seen as providing an essential service. Regular preventative maintenance is that reduces reconstruction costs by half. As the network grows, the maintenance budget also has to grow to keep up.

Were you following, or were you at the Winter Cycling Congress? What were your favourite takeaways? Let us know in the comments!