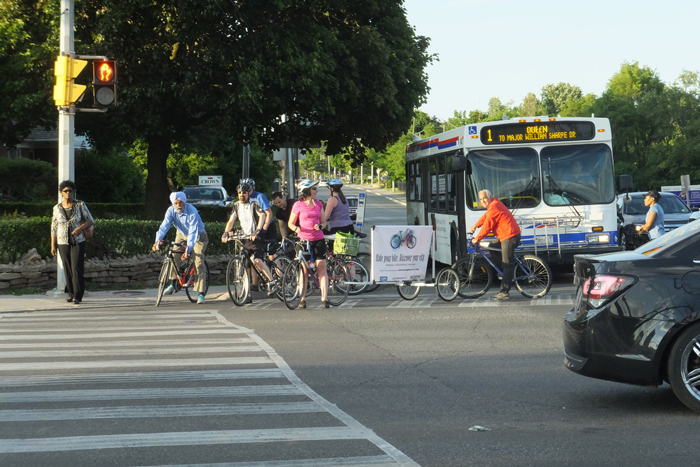 Jul 22nd Brampton Guardian Editorial expresses the advocacy message of BikeBrampton to a ‘T’. With greatest respect, the entire contents are reprinted here in case any of our subscribers missed this excellent piece of work. Our sincere thanks to Brampton Guardian editorial staff. “European cities don’t have all the answers to creating livable cities, but they are […]

With greatest respect, the entire contents are reprinted here in case any of our subscribers missed this excellent piece of work. Our sincere thanks to Brampton Guardian editorial staff.

“European cities don’t have all the answers to creating livable cities, but they are trying.

­The same can’t be said in Canada, and in particular, Peel Region.

Our love of the car has created a deadly mess, as recent police reports prove.

­This week, a 17-year-old cyclist in Brampton was killed.

­The tragic death of a former Olympian, Steve Hancock, struck and killed while cycling in Mississauga, is another example of the carnage on our streets.

It’s clear that in Peel Region, cyclists are very much on their own.

Which has caused advocates to step up and say it’s way past time for change.

A deadly cocktail of cars speeding, no barriers to separate cyclists from traffic, and streets that were built without dedicated bike lanes are some reasons why cyclist fatalities have trended upwards since 2012.

In Stockholm, for example, our reporter Peter Criscione found that cars and cyclists coexist on physically separated lanes.

­The streets are filled with joggers, baby strollers and pedestrians.

In Brampton and Mississauga, cyclists are unwanted, and unheeded by drivers. Our development was based on a love of the car and a dismissive attitude towards cyclists and pedestrians.

Last year, there were 260 crashes involving cyclists in Brampton and Mississauga. Of those, 110 cyclists were injured, and almost half of them seriously, according to Peel police. Yet only one died in 2015.

We doubled that total in recent weeks.

In Stockholm, the city is looking to build on an existing 800 kilometre network of cycling trails, and massive expansion of its public transportation network.

Here, virtually nothing is happening.

A former Mississauga planner, Gil Penalosa, started Walk & Bike for Life a while back, and that morphed into 8-80 Cities.

Its mission is having streets and neighbourhoods that are safe and inviting for people of all ages. One of its key initiatives, car-free days, or ciclovias, makes so much sense, says Penalosa. Ciclovias involve closing certain streets to make the paved space available for walking and cycling. In some cities it has been embraced and modified to fit the landscape and residents.

Penalosa knows something like this has to happen in Peel.

We need to dedicate more bike lanes, separate them from traffic, and slow cars down on our inner city streets, like they do in Europe and in major cities around the world.

We must view cyclists as welcome partners on our roads, not an imposition. We also have a duty to keep these cyclists safe.

­The recent spate of deaths brings into sharp focus the need for a headlong pursuit of road safety measures that make life easier for our beleaguered cyclists.”

You are invited to join us tomorrow night, July 26th at Gage Park (Main & Wellington). We meet at 6:15pm.

A teenage cyclist died after getting hit by a minivan in Brampton on July 19, 2016

The 17-year-old boy was struck at the intersection of Chinguacousy and Duffield roads at around 9:30 p.m. Police say he was rushed to a Toronto trauma centre where he was pronounced dead.

There will be a delivery of a ghost bike memorial at the intersection where the collision occurred.

All are welcome and encouraged to join the ride.