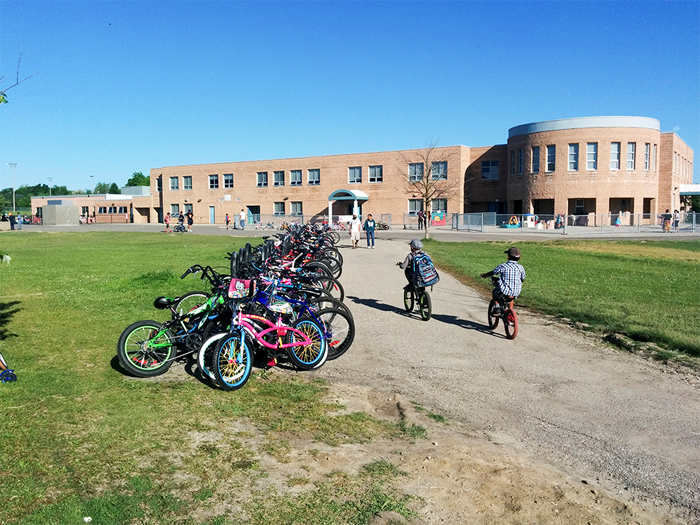 On the final day of Bike to School Week, the mother of a kindergarten student was locking his bike to the rack as I was counting the bikes. The bell had already rung.  She told me that they had been running late and she told her son they would drive the car to school.  “No […]

On the final day of Bike to School Week, the mother of a kindergarten student was locking his bike to the rack as I was counting the bikes. The bell had already rung.  She told me that they had been running late and she told her son they would drive the car to school.  “No Mum”, he told her, “I have to ride my bike and exercise my brain”. I was thrilled.  The message is working and children, even very young ones, can influence their car dependent parents’ behaviour.

This article was written by Lisa Stokes, BikeBrampton member. She shared her parent experience, her article and her photographs.

For the second year in a row I worked with Walk+Roll Peel and the principal at my children’s school in northeast Brampton to encourage participation in Bike Week.  In 2015, it was due to my encouragement that the school decided to enroll.  You can read about that week here.  This year, the principal assigned a teacher to work on Bike to School Week and asked me to help.  I was pleased that, not only did they want to participate again, but that they also took the lead this time.

The school has an enrollment of 770 students.  On our final day of the week we had a 17% cycling modal share! Bike Week was promoted to families in the school newsletter, advertised on the notice board outside the school before Bike Week began and added to the morning announcements at the school each day, during the week leading up to Bike Week, and during Bike Week, with a student reading bike related tips.

Additionally, at the Character Assembly in the week prior to Bike Week, I gave a presentation on cycling to school, which you can see here.  This image, from the presentation, is what stuck in the kindergarten student’s mind.

[The above image has been adapted by Lisa from the following research: (Hillman C.H. et al. (2009). The effect of acute treadmill walking on cognitive control and academic achievement in preadolescent children. Neuroscience. 159(3):1044-1054).]

The week was wildly successful with bike racks full to overflowing. We had to direct children to lock their bikes up again the kindergarten fence.

We didn’t have enough stickers for the Bike to School Week counting chart.

The mode share has been as high as 17% during Bike Week.

I will end with a conversation I had last week with the teacher who has for years directed traffic in the Kiss ‘n Ride as her morning duty. Last week she gestured to a driveway that had only a few cars and no line of cars on the street waiting to turn into the school causing a traffic jam.  She told me, “My job has gone from being the hardest one to the easiest one”.

I advocate to make Brampton a better place for cycling for everyone and to change the behavior of the next generation.  It’s working.