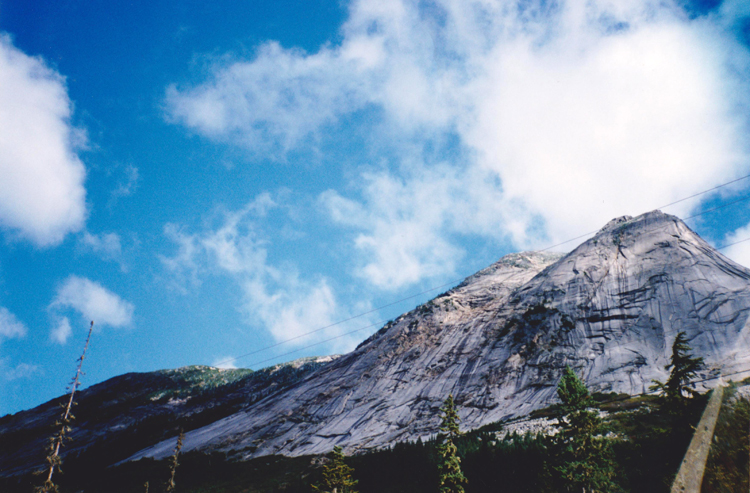 When we talk about epic struggles, like man versus mountain, we must realize that in this conflict, the mountain does not care. The mountain is just there, looming. “There was a time in this fair land when the railroad did not run. When the wild majestic mountains stood alone against the sun” – Canadian Railroad Trilogy,  by […]

When we talk about epic struggles, like man versus mountain, we must realize that in this conflict, the mountain does not care. The mountain is just there, looming.

“There was a time in this fair land when the railroad did not run. When the wild majestic mountains stood alone against the sun” – Canadian Railroad Trilogy,  by Gordon Lightfoot

Man is just an insignificant speck with a manufactured personal challenge to scale the mountain. Whether man succeeds depends less on the mountain and more on how truthful the man is about his own abilities.

In the high mountains there is always the wild card, the unknowable, and that is the weather.

In the early September 1993, I was doing an assisted tour across the province of British Columbia. My companion was driving a rental car and we would meet at predetermined spots along the route. The beauty of this was that I could ride with the freedom of minimal gear on the bike. My bike at the time was a Miyata Ti6000. This was a blended tubing bike, with the Ti denoting titanium tubes, in the main triangle, while the 6000 denoted an aluminum alloy in the front forks and rear stays. This bike was considered light for the day. A gel infused saddle, longer wheelbase, and a slight flex in the frame, combined to make it a comfortable all-day bicycle. It had no mounts for racks or fenders, so it was definitely not designed for touring. The Shimano Ultegra gearing had standard ratios, so it was a good thing I was not hauling full touring gear over the mountains.

The challenge was to ride from Lake Louise, Alberta to Vancouver, British Columbia in as few days of riding as possible. I had taken a rest day in Kelowna and was raring to get back on the road again. The temperature on the rest day had hovered around 34 degrees Celsius, which felt like it was sapping my energy. So, I was encouraged by the slightly cooler temperatures the next morning and I knew things would be more comfortable once I headed into the mountains.

I had decided the night before, to change my original planned route, from the longer, less direct, southern route on Crowsnest Highway to the relatively new Coquihalla Highway. The ‘Coq’ had been built in the late 1980s to do specifically that, save time and distance crossing the mountains. Previously, the roads, like the railway, would use the lower passes to get across the mountain range. Consequently, the newer highway was more direct and there were fewer towns and settlements along its length. The fact that it rose high into the mountains effected the conditions in winter, to such an extent that a modern television show has been produced about the heavy wreckers who patrol the Coq called “Highway Thru Hell”.

The day started off gorgeous as I pedalled the 138 kilometres from Kelowna to Merritt, joined Route 97C leading to route 5A, high into the mountains. As the morning progressed the road began to tip up. I got used to a constant subtle grade as the day wore on. Although I got used to it physically, the psychological aspect of climbing, kilometre after kilometre, with no end in sight, was daunting.

My visual reference points were mountain peaks in the distance. Gradually, after what seemed like an eternity, I realized that instead of looking up at those mountain peaks, I was looking across at them. After over 50 kilometres of climbing, I was high in the mountains. The air had become gradually cooler over the climb and some cloud cover had developed. Then the worst scenario occurred.

The wind picked up, a gusty head wind, and it began to sleet. At a previous rest stop, I had met my companion with the rental car and changed into the warmest cycling clothes I had – an Adidas nylon jacket and track pants. In those days, I did not have any of the high-tech cycling clothing that we take for granted today.

Things got worse, the head wind picked up more and the driving ice crystals and snow stung any exposed skin. Through squinting eyes, I could see that I was able to look across at the tops of other mountains and the climb was finally over.

However, there was still at least 10 kilometres of exposed road into Merritt. The front of my body was coated in snow and ice, my hands felt like they were frozen to the handlebars. At the next pull over spot, upon consultation with my travelling companion, I reluctantly conceded to the mountains. The bike was disassembled and put in the car, and I warmed up in the passenger seat for the remaining kilometres into the logging town of Merritt.

The next day, the early morning sunshine created a different environment in the mountains. It was still cool in the high mountains, but I was comfortable on the decent, as I headed for the next stop, 213 kilometres away, in Mission, British Columbia.

The thing about the Coquihalla Highway is that it was designed as a modern, safe, highway slicing through the wilderness. The shoulders are as wide as a car lane and the ditches are cut back to tall continuous fences that are designed to keep wildlife off the highway. There are several tunnels under the road to allow wildlife to cross underneath the highway. I shared the road with vehicles travelling at highway speeds of 120 km/hr, yet I felt comfortable.

At that time, with the highway being relatively new, the shoulder where I was riding, was as smooth as a billiard table. As I cashed in on the climbing I had done the day before, I descended long sections at up to 80 kilometres an hour for extended periods. This appeared to be the governed speed, according to how long I could hold an aerodynamic tuck, with the parachute like flapping of my clothes holding me back. The speed was easily modulated by raising my body slightly to catch wind against my chest. Since the road was mostly straight with very gradual curves, there were no periods of drama. There was little need to even touch the brakes.

What I learned that day about velocity on a bicycle, is that it is all relative. With a wide, straight, smooth road and no hazards, 80 kilometres per hour does not feel excessively fast. The whole trip gave me an extreme appreciation of being among the majesty of the mountains, as well as respect for the power of nature.

There were other stories to come out of this cycling adventure, but they are for another time. Story by Steve Stoller.